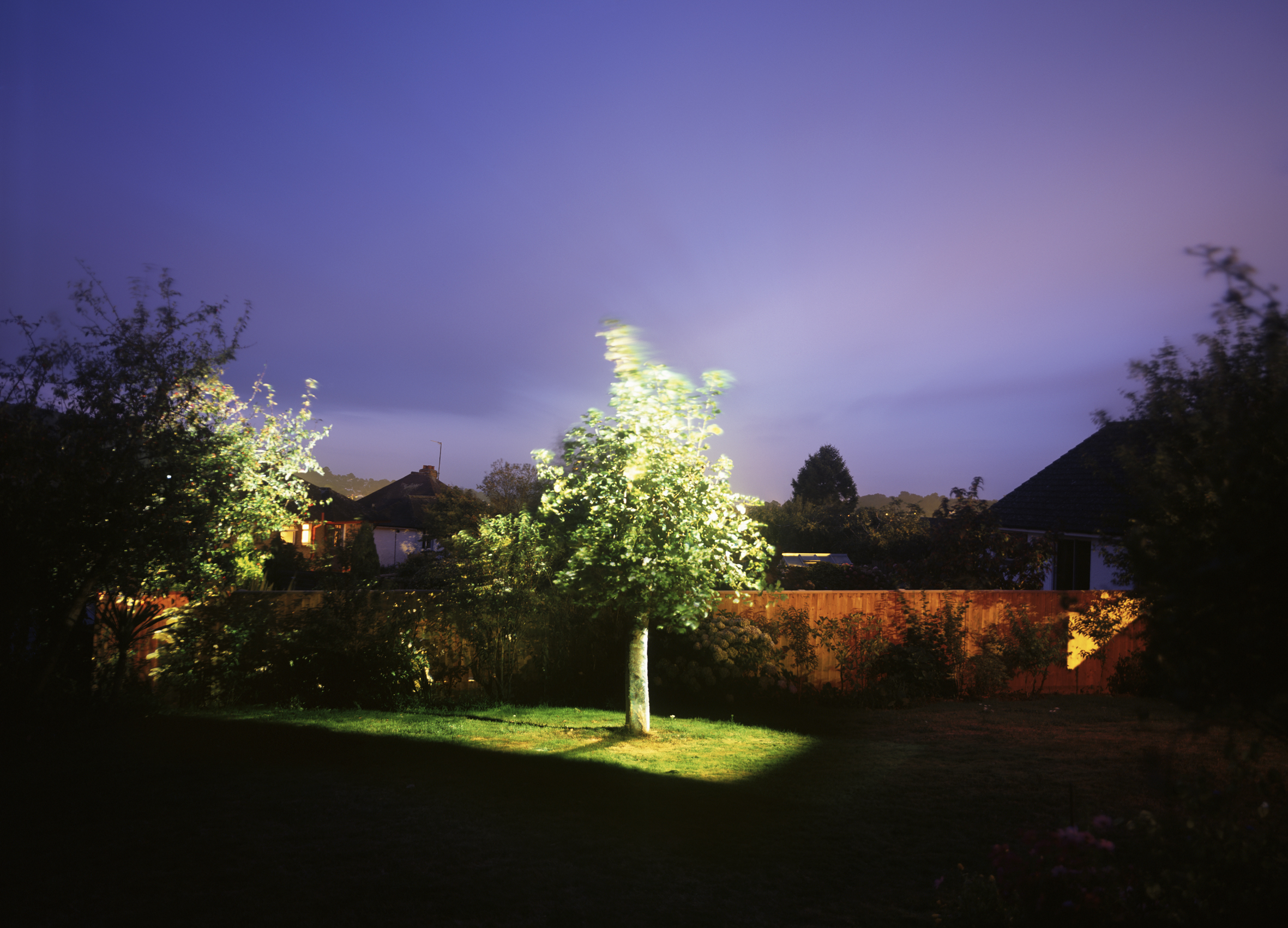 Somewhere, in passing, Emily Dickinson observes with a curt, dark lyricism that,

Presentiment is that long shadow on the lawn

Indicative that suns go down;

The notice to the startled grass

That darkness is about to pass.

The square light of ‘Eden’ though is cast sharply across a suburban lawn, shining upon and filtering through the branches of a tree that tentatively cups an amethystine sky.  No vague ‘presentiment’ here, light signals instead something surer, something like a quiet knowledge, the memory of which all trees bear after the one of Eden.   From Plato onwards, the claim to knowledge and the seeing of light have always been connected somehow: the various words we use to express our forms of knowing testify to this: enlightenment, elucidation, reflection, illumination.  On an MRI, the brain’s electrical impulses trace the passage of thought:  exquisite synoptic explosions light up a darkened screen.  Light tells us that we know. But the things upon which we gaze, the world that crowds around our thinking, the objects that prompt our reflective consciousness, all bear their own light, independently, as though they were lit from within with more than the light we could ever bring to them or draw from them.  Everything is illuminated:  in the right light, at the right time, everything is extraordinary.

Light strikes the tree of ‘Eden’, with exactly that tender, unexpected force: it strikes, but it also bears this lambency like a benediction, accidentally granted upon something that knows the certainty of its own steadfastness and discloses this with neither velleity nor violence.   Light strikes: in some places, it gleams and flickers and sears with fleeting joy, in others, it fills and diffuses, sometimes filtering, dousing and coursing through the urban landscapes pictured.  In that elongated moment of a frame, the speed of light is stilled so that it might reveal the swift curvature of the light of stars.  It allows the slow unfurling presence of things in the lingering light of haze, glare, halo, aura. This kind of light acknowledges a slow knowing that gives to thoughtfulness its due: it recognises an illumination that is not instantaneous, but calls upon the patience of reflection, the long brilliance of a dawning knowledge.  The light that might brand a retina now bears steady gazing: and this searching kind of seeing has the measure of light’s own intensity and repleteness.