This is an immensely enjoyable addition to Lang’s series of books, Cultural Interactions: Studies in the Relationship between the Arts. John Harvey’s earlier works in visual studies include The Story of Black (Reaktion, 2013). His literary criticism includes Victorian Novelists and their Illustrators (Sidgwick and Jackson, 1970) and his novels include a study of John Ruskin’s marriage, The Subject of a Portrait (Polar, 2014).

In The Poetics of Sight, the author seeks to analyse the role of what he terms ‘a complex sight’ within the literary metaphors of, amongst others, Shakespeare, Pope, Dickens, Pynchon and Houellebecq, and within the visual metaphors of a range of visual artists including Picasso, Magritte and Moore. A stand-out chapter is ‘Bleak House to Lighthouse: The Optics of the Novel’, which charts the rise of ‘vividly-seen’ novels by a wide range of authors including Flaubert, Tolstoy, Proust, Robbe-Grillet and DeLillo. One of Harvey’s key theses here, supported also by the concluding chapter, ‘Metaphor and Modernism’, is that the ‘visual metaphor’ acquired overarching importance in the twentieth century. He makes a convincing case, with examples drawn from Marcel Duchamp, Francis Bacon, Joseph Beuys and Anish Kapoor. 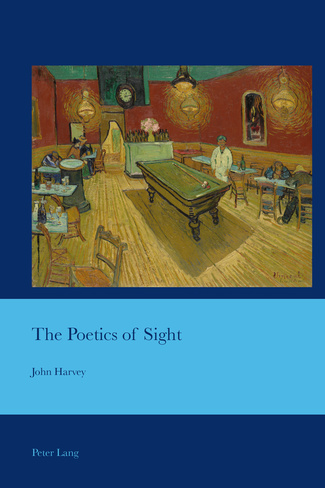 In the chapter, ‘The Unequal Art of William Blake’, Harvey typically wears his immense art historical and literary scholarship lightly, applying it to a selection of well and lesser-known of Blake’s works. He pulls no punches about the shortcomings of the painter-poet’s insistence on drawing from memory (rather than life), and the excesses and naivety of some of his more obscure poems. Passages detailing Blake’s fraught relationship with Christianity are especially strong: ‘in the later watercolours he can resemble a doubting priest, grown too in love at once with the sacraments, and with the thrill of sotto voice blasphemy, to leave the church’ (87). However, too much of this material is at the expense of any truly meaningful analysis of the way word and image synchronise in Blake’s art. Describing the page on which ‘The Fly’ is printed in Songs of Experience, Harvey notes how its beautiful illustration ‘is far from clear in its relation to the poem, though one welcomes the distance between them, which leaves both poem and picture free to work in our imagination, and to establish without prejudice what relations they may’ (99).

This passage embodies both the pleasures and the frustrations of reading The Poetics of Sight. Here is a refreshingly assertive, qualitative assessment of Blake’s work, but at the exact point where Harvey might provide a radical critique of how it contributes to the ut pictura poesis debate, he sidesteps into an absorbing but ultimately unilluminating comparison between the Blake poem and Thomas Gray’s ‘Ode on the Spring’. Most chapters end suddenly, without any definitive sense of Harvey’s overall project being addressed. Occasional repetitions (we are told that Thackeray ‘had studied art in Paris’ on pages 170 and 183 and that Kapoor is an Indian Jew on pages 256 and 257) and other slips in editing suggest this book might have truly lived up to its title were it half the length and had taken its author twice as long to write.

The Poetics of Sight’s long introduction hints towards a genuinely phenomenological approach, with Harvey providing compelling glimpses of his own childhood memories and how aspects of the science of perception (saccadic sight, the movement of blood corpuscles across the retina, etc.) might offer a refreshingly new take on visual studies. He contends, ‘The picture making that goes on in our head as we read is often complex, and rich in its connections, though very little attempt has been made to study it (9)’. Whilst this book successfully analyses a wide number of such connections, too often the author’s talent for such critical insights gives way to his gift for a very familiar, if still necessary, form of exhaustive comparative criticism, with an excessive focus on description.