This is a compelling, scrupulously researched book that offers a history of Mizoram from the 1860s to the 1980s encompassing its co-option of Christianity during the time of the British Raj, to the Mizoram National Front’s resistance to Indian rule, finishing with its transition, in 1987, from being a Union Territory to an Indian state in its own right.

A total of twenty-four short, lavishly illustrated chapters take in all aspects of Mizo culture and are divided into four main sub-groups. ‘Becoming Mizo’ covers the first photographs of Mizoram people by Presbyterian missionaries and the introduction of literacy to the people of the Lushai Hills. Pachuau and Schendel document the ensuing transition from a bartering to market economy and the Mizo people’s contribution to the World Wars. The chapters making up ‘Mizoram in the New India’ cover the withdrawal of colonial rule after 1947 and Mizoram’s subsequent fraught relationship with Delhi and the new Indian order. ‘Visions of Independence’ looks at the bamboo famines that Mizoram struggles with at roughly predictable twenty-year periods. The Assam authorities’ lack of understanding of this phenomenon led to the Mizo forming their own voluntary organizations to co-ordinate relief work. One of these (the Mizo National Famine Front) developed into the Mizo National Front (MNF), which waged a twenty- year insurgency against India. ‘Mizo Modernities’ looks at Mizo youths’ co-option of other modern identities, from the coiffed hairstyles of rock ‘n’ roll to the military fatigue chic of Che Guevara and Hollywood visions of cowboy cool. This final group of chapters are perhaps the most absorbing and certainly puts forward the case that Mizo people were readily influenced by contemporary Western styles. But describing this as ‘dizzying cultural innovation’ (Pauchuau & van Schendel, 2015, 422), as the authors do in the concluding chapter, feels like a bridge too far. It does no disservice to the people recorded in these pages, who were of course working in a very young country and under the shadow of war, that their visual modes of self-representation (if not the music itself, which is not included here) were highly derivative of their influences. Unlike the case with their elders, for instance, where traditional Lushai dress was fused intriguingly with its Christian counterparts, there appears within the fashion choices of Mizo youth to be no such alchemy. Rock ‘n’ roll’s look was aped but not built upon.

Drawing on a vast number of mostly private Indian photographic collections, the choice of pictures in The Camera as Witness for the most part complements the text brilliantly. But a major shortcoming of this book is that it perhaps fails to treat much of the photography it incorporates with the same rigour that it affords its written sources. For instance, the authors claim that professional Mizo photographers produced a significant percentage of the pictures included in the book but we are given no names for any of their creators. And the period of well over a century that is covered by this book takes in vastly differing number of photographic techniques and processes, none of which are acknowledged here. The authors are clearly aware of photography’s increasingly powerful use as a central evidence base for historical arguments: some lucid sections in the introduction acknowledge this. And perhaps it is beyond the scope of this survey to use visual sources quite so centrally. But it does feel as if some opportunities have been missed for photography itself to take on a greater agency than it is afforded here, especially in the chapters dealing with fashion, the Mizo music scene and Mizo photographic studios.

Despite the thematic, loosely achronological ordering of its contents The Camera as Witness is not the ground-breaking visual-verbal exegesis of an overlooked culture that its blurb claims it to be. Rather, it is a beautifully illustrated, but essentially rather conservative, work of historical anthropology. But in the authors’ defence, the more sobre text inside the books’ covers reframes the project as something more modest in scope. Amongst other ambitions, Pauchuau and van Schendel have sketched out for this work is the hope to inspire further research projects. And if such projects emerge, then it seems reasonable to assume that they might indeed be innovative. A much closer look at some of this captivating material, and more license given to the power of photography itself, might indeed yield results that offer ‘radically new way(s) of thinking about or looking at history’. 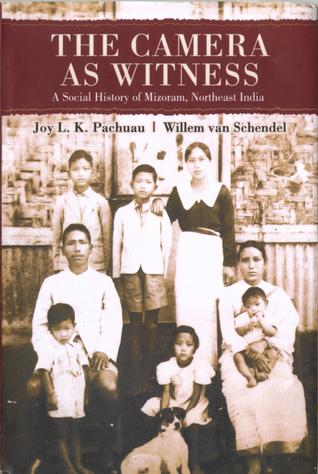