This exhibition, culled from over a thousand applications to Foam’s annual Talent Call, brings together work by photo artists under the age of thirty-five from across the world. As with Foam’s flagship magazine, the subtle, unobtrusive curation here offers each artist the equivalent of a few pages’ ‘spread’, forming, in effect, twenty-one mini solo shows at Beaconsfield.

If fine art photography was characterised in the nineties and noughties by pared-back, minimalist presentation, then the vogue in the current decade has seen a clear reaction against it. This is a tendency perhaps catalysed by Foam in its influential Amsterdam museum and certainly endorsed by it here. Every trick in the contemporary playbook of how to install ‘expanded photography’ is present. We have the mixing and physical overlaying of wall-sized posters with smaller, framed works. One piece hangs directly from the ceiling, allowing a 360-degree view; another mingles handwritten field notes with original prints, displaying both horizontally in vitrines. Within single artists’ installations, prints are of dramatically different sizes; various framing techniques intermingle freely. A noticeable number of contributors float half of their works markedly above or below -often both- a standard museum eye line.

But whilst accusations of impeccable trendiness might be inevitable, and are presumably sought, given the show’s title, the vast majority of such approaches in really do enhance the individual artists’ visions here. And the singular and even whimsical approaches adopted by a significant proportion of them are one reason why this exhibition makes a good case for photography’s continued vitality as a medium.

Dominic Hawgood’s Under the Influence is a bold, unnerving body of work featuring meticulously staged light boxes and large unframed prints that grew out of the artist’s interest in purported exorcisms taking place in East London churches. A similarly, singularly human encounter sparked Márton Perlaki’s ongoing series Bird Bald Book Bubble Bucket Brick Potato. It features Elemer, a bald albino with a touch of Max Schrek’s Nosferatu to him, whom Perlaki found by Facebook casting. The wall panel informs us Elemer is ‘a happy family man and a teacher living and working in Szolnok, Hungary’. But no good artist lets everyday life stop them from creating their own reality around their muse, and the humour here comes from Perlaki treating Elemer as just one among many photographic props. One unflattering juxtaposition pitches Elemer’s pale upper body near a balloon-like structure -also white- perhaps made from a surgical glove, and a row of glass flasks containing solutions of varying intensities. Another shot shows Elemer’s head and neck being massaged or measured: perhaps both. With it odd 1970s laboratory aesthetic, the whole thing feels like an extended in-joke or a parody of contemporary art’s propensity to alienate people. But at the same time, Perlaki’s control of colour, form and contrast creates tableaux of great elegance, and despite the deadpan tone, there is a sense of fun, trust and complicity between artist and subject. 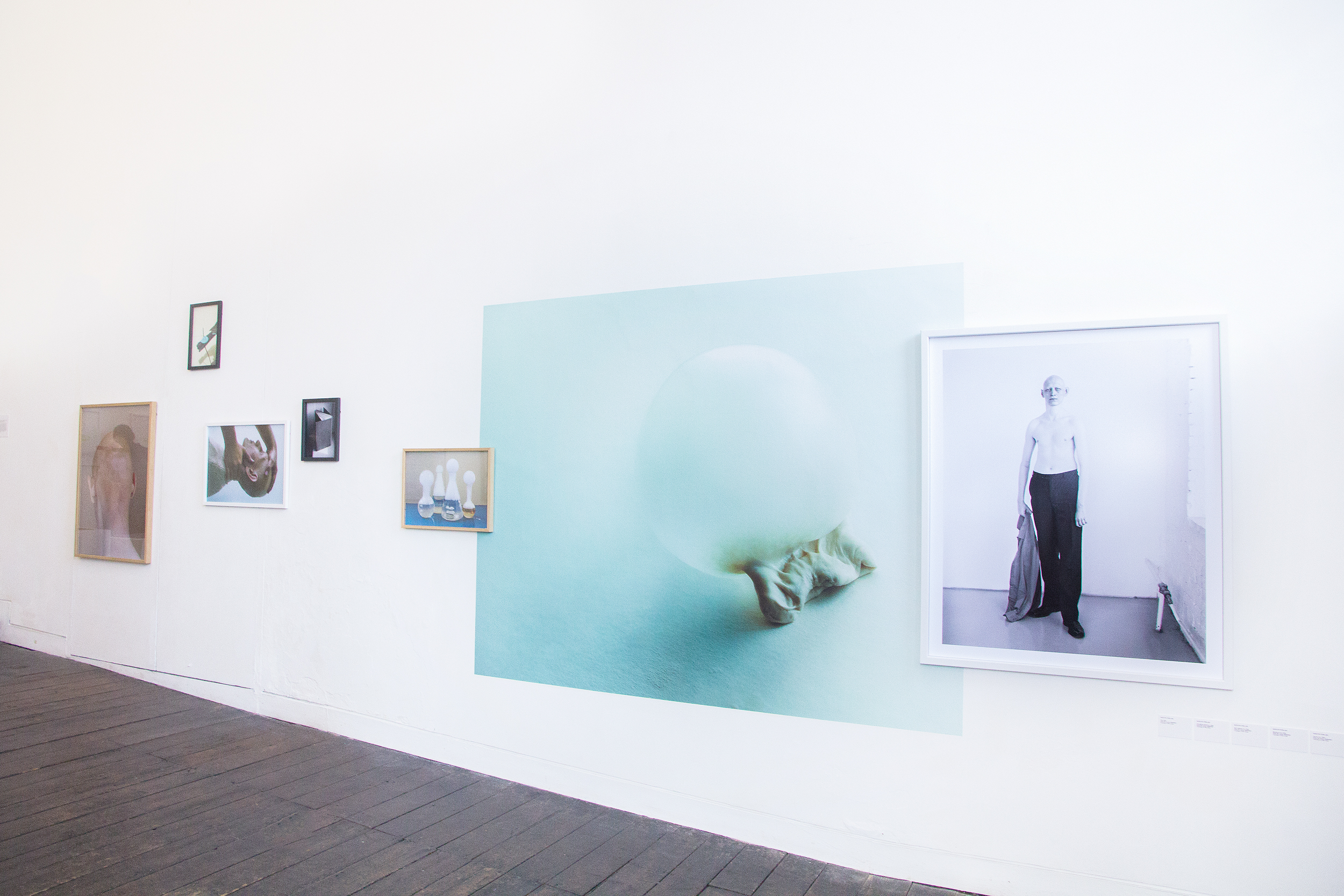 Another stand-out installation features a succession of dramatically lit monochrome photographs by Tom Callemin: a stained-shirted figure shot from behind; a barking dog; a ruined stone cottage; gnarled tree trunks; pairings of people that feature tense imbalances of power and sex. In one, a young blonde woman holds her eyes shut while she appears to be guided or lightly restrained by an anonymous male figure behind her. In another, a middle-aged man shields both his own eyes and those of the young girl standing with him, from the photographer’s lens. As with Perlaki, a vague air of deviance adds an intriguing edge to the bold, powerful aesthetic. The high resolution of the images and lush, velvety printing gives each picture a palpable physical presence. And as with Hawgood and other notable contributors to this show such as Heikki Kaski and Christian Vium, Callemin appears to be acting on what Hollis Frampton called the ‘vagrant urge’ that the camera induces: a willingness to follow hunches and work instinctively. Foam Talent is a reminder of photography’s capacity to transform and heighten reality whilst retaining the authenticity and thrill of the everyday. 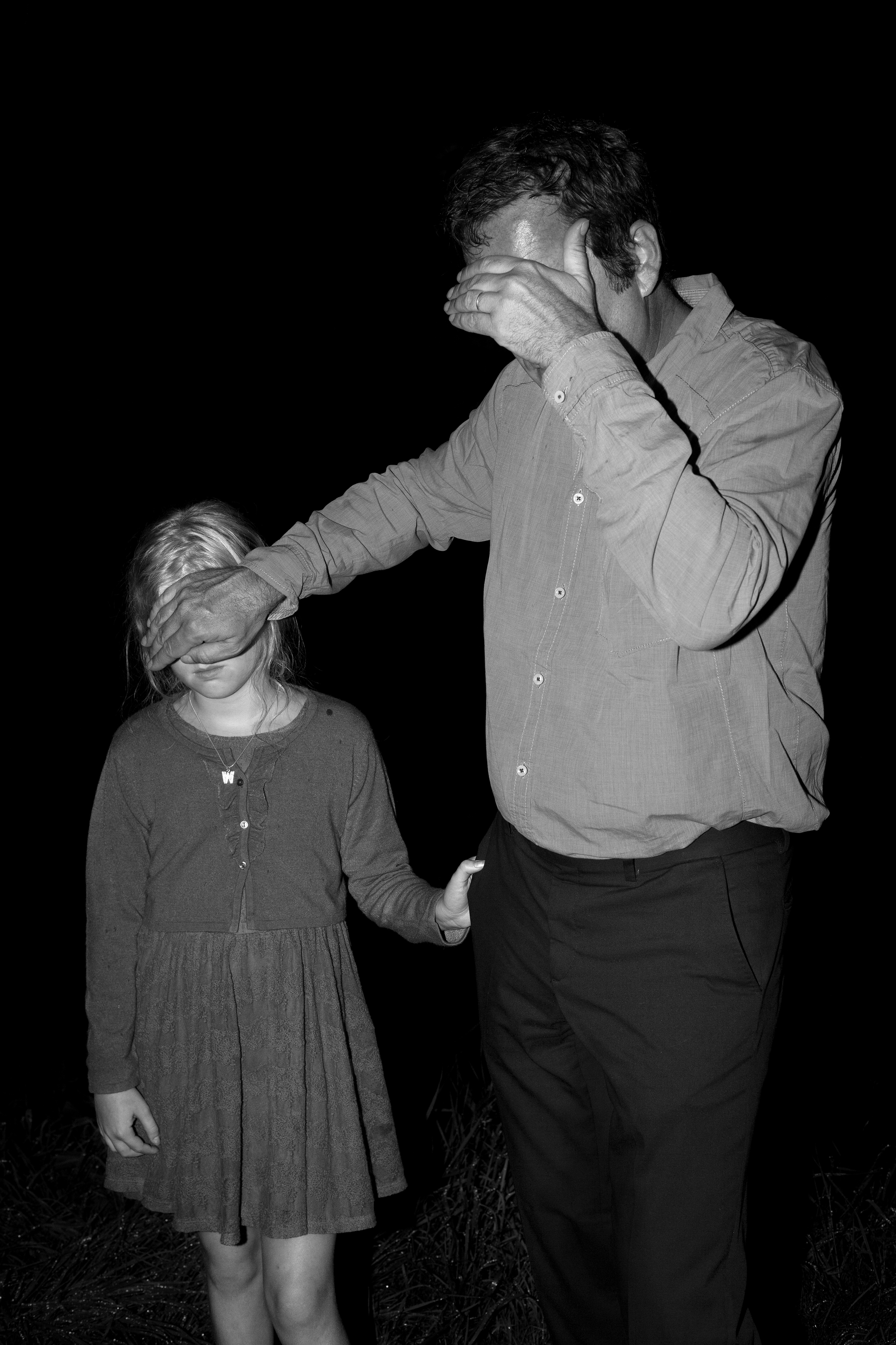